How Worried Are You?

A friend asked me this week, given that you hold stocks how worried are you about a crash or major correction? Charlie Munger was asked a similar question during 2009, and his answer came to mind - "zero."

There is good evidence why that's the case. For investors who are heavy into cyclicals, biotechs, nanotech, tech tech, and all manner of flavor of the month (Michael Kors is hot, oh wait its not), there probably should be some concern. After all, there are plenty of risky stocks. Does that mean "the market" is risky? I do not think so, at least for some corners of the market where defense is prized over offense. So to the evidence, here is the ten year dividend returns for the WMD portfolio members. 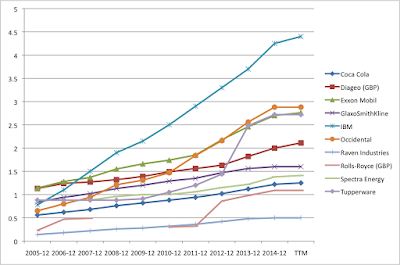 Do I think the prices in the stock market are overdue to pull back by a double digit percentage? Sure. I thought it was overdue last year, too. But we just saw a massive pullback in 08-09, which was smack in the middle of the chart above. You know what? Its pretty hard to spot the impact looking at the dividend returns from wide moat companies.

The ability to pay dividends through a crisis like 08-09 is in itself a margin of safety, it shows the company's cash flows are stable, and the cash is useful to an investor who may be able to reinvest it at better prices. Its not to say that investors should be smug, the going in proposition with this type of investing is avoiding mistakes after all, its not swinging for the fences. Will the markets pull back? Sure, but like Buffett says - predicting rain doesn't count, building arks does.  Wide moat dividend payers are as close to an ark that can weather 08-09 storm  as an investor can reasonably expect to find. The quality companies not only manage through but come back even stronger, because they can reinvest through the crisis and take advantage of bargain prices.
Posted by gunnar at 6:01 PM 2 comments:

The Detective and the Investor

One of the first books I read when I started learning about investing was Robert Hastrom's "The Warren Buffett Way." Hagstrom is a writer who excels at seeing connections and finding patterns.

As a fan of detective stories in general and Holmes in particular, I was happy to uncover a Hagstrom book from 2002, called "The Detective and The Investor." Its out of print now, but easy to find copies on Amazon. If you like investing and detective novels then you will enjoy it, because Hagstrom finds a lot of common thought processes from great detectives  and investors.

There is a chapter dedicated to the specific techniques of the three main subjects that Hagstrom covers: Poe/Dupin, Conan Doyle/Holmes, and Chesterton/Father Brown. Each chapter then links what the investor can learn from the methods of the detective.

Hagstrom draws out the Habits of Mind from the great detectives:


Hagstom skillfully traces the evolution of the detective novel, which he says begins with Poe's Dupin. The book shows how each of the three detectives refined the craft of the detective and brings new methods to the table. Each of these prove useful to investors as well.

Dupin shows the value of plodding detective thorough investigation (Hagstrom calls this the document state of mind) when combined with the tenacity to dig out as many facts as possible. This is done both by confirming and disconfirming observations. The most talented, productive people that I have worked with are the ones who work the hardest at beating up their own ideas.

Holmes has many qualities of successful investors. To cite one example, Holmes works at determining the underlying factors of what appears as self-evident. Holmes says "There is nothing more deceptive than obvious fact." That quote immediately brings to mind Charlie Munger's - "every time you see the word EBITDA, you should substitute the word ‘bullshit’ earnings.”


In the Father Brown chapter, Hagstrom shows how Buffett's famous Coca Cola purchase occurred at a time in 1988 when Coke was selling at five times book value, a below average dividend yield and an above average P/E. Where was the buy signal? Yet Buffett found it, put in $1 Billion and it led to one of the best investments of his career. Though the raw numbers did not show it, Buffett, like Father Brown, saw that things are not always as they seem.

Its a unique book on two of my favorite topics, so its hard to have too many quibbles. Some of the analogies and linkages are a bit of a stretch, but that is unavoidable in this type of writing, and the main points that connect the analytical toolboxes are expertly linked. Chesterton's work went well beyond detective novels and it may have been interesting to hear more about his other work as a logician. But these are minor points, like licorice this book is not for everyone, but the people who like it will like it a lot. If this is the kind of book that you will like, you already know it by now. I think its a hidden gem.
Posted by gunnar at 1:16 PM 1 comment:

Dividends Give Management Discipline and You a Seat at the Table

“I think dividends—if there is a religious activity here, I think that’s it. It provides discipline to the management. Otherwise you print shares, do all sorts of wealth-destructive things. The dividends give you discipline.”

Investors always want to know not just that they are buying a piece of a business, but that they as an outside investor have a seat at the table, a voice in the overall direction. At the same time, the companies need a mission statement. For a company like Facebook its about identifying leading technology trends which can justify the massive purchases like Oculus and Whatsapp.

For companies that prioritize dividends its far simpler - maintain and increase the dividend. So any use of cash by management must be judged by that yardstick. That means in turn that when management evaluates the numerous options that any company has, it has to clear the hurdle that it would be able to continue to pay its dividend and increase chance for dividend growth down the road. So outside investors are present, not in person but virtually, in any major capital allocation debates.

I am sure that outside investors factor in on some level to most companies, whether they pay dividend or not, however its not always clear where shareholders fit versus management growth plans, incentive schemes, or corporate flavor of the month. In the case of dividends, we outside investors get our own line item on the Cash Flow statement- Cash Dividends Paid. We're first class citizens not an afterthought.

That's no guarantee that the right decisions will be made and there could be some cases where dividend growth should be put on the back burner for some period of time (in my view GE's current restructuring is an example here). Still the fact that dividends paid to outside investors represent a line item every quarter, year over year, that is expected to maintain and grow, this fact represents a distinctly different type of company-investor relationship.

In the case of Occidental this has proven to be profitable. Given the oil price crash, Shell and Chevron both had to borrow to pay their dividend, and they both had to hold the dividend steady because they do not have the cash flow for dividend growth. On the other hand, this week Oxy managed to increase its dividend by 4%. Shell and Chevron are both engaged in behemoth efforts with BG and Gorgon respectively, the much smaller Oxy is going the opposite direction, selling off its assets in Middle East and North Africa, and instead transforming into a pure play on its best asset the Permian. For investors, simplicity and focus often trump grand plans, especially when the company's management uses dividends as a filter for ideas.
Posted by gunnar at 10:06 AM 2 comments: