Matt Yglesias has a post called "Dividends Are Evil", he is right in some ways, but mostly wrong. Let's count the ways:

1. Yglesias begins by saying that dividends are a "triumph of short term thinking"; I could not disagree more. Dividend investing requires long term thinking. No one cares about a 3% current yield, but if you can grow it into a double digit yield on cost you have a pretty interesting investment. This will take ten years, so you are automatically oriented to a) quality and b) long term. Thinking a decade plus out is vastly longer term than 99.9% of Wall St, and that's a good thing.

2. Yglesias leads off the piece criticizing GE and AT&T for raising their dividends. He is singularly unimpressed by AT&T's track record of 30 straight years of dividend increases. Please re-read above point #1. A 1984 investor in AT&T got paid $0.11/share dividend and today the yield is $1.76. I doubt long term holders are complaining too much. If anything AT&T shareholder might wish for better growth, the 25 year annualized dividend growth rate is 5.9%. Did all these payments hurt shareholder returns as Yglesias is concerned about?

3. Yglesias: "When a firm such as GE flushes cash out in this way (dividends), the good news for shareholders is that they get money...The advantage, of course, is that you can use money in the bank to buy a car or make a down payment on a house."

Yes, that is an advantage! Far from being a negative, its simple, relatively efficient way to return cash to shareholders. As Morningstar's Josh Peters says, "dividends are always a positive." This is worth keeping in mind, because Yglesias goes on to state that buybacks are a better way to return cash to shareholders. That can be true, but not always.

4. Yglesias goes on to make the case for buybacks. A lot of income investors eschew buy backs, preferring say Shell's 5% dividend yield versus Exxon's 3% yield plus buybacks. I think there's plenty of reasons to like buybacks in some circumstances. Some of the great capital allocation track records in history, like John Malone's, have been built up through judicious buybacks.

Aye, but there's the rub. There are not many John Malones out there! Michael Jordan played by the "Jordan Rules", what is good strategy for the best of the best is often a recipe for disaster for the average, i.e most management teams. If you have a John Malone at the helm, then buybacks are a wonderful way to return cash to shareholders, and Yglesias is right to say that they are more tax efficient than dividends. But this is only the case when you have a master capital allocator at the helm with talent and integrity. Otherwise, buybacks can absolutely destroy shareholder value. Look no further than HP where various managers bought back 1/3 of shares outstanding in last decade at prices well above today's, and at the same time earnings per share went way down and debt went way up. So whereas dividends are always a positive, buybacks can be good or they can be a way to light money on fire.

5. Skills. Yglesias says "the only real disadvantage is that buybacks look unattractive when stock market prices are relatively high", CEO skills are around operating their business. Making airplanes or jet engines or running restaurants or mobile networks, is it reasonable to expect a CEO that can do all the things necessary to operate effectively and on top of that be a great judge of when is a good time to buy? Given that mutual fund managers as a group underperform the S&P 500 when that is their only job, its unreasonable to think any CEO can do this as a second job in addition to running their company.

Let's say you are CEO of Caterpillar. Every day you have find a way to widen your moat, compete with Komatsu, watch for new upstarts from China, deeply understand the global infrastructure cycle, and ensure the business operates at maximum efficiency. If you do all of this you are in the top 10% of CEOs. Now on top of that is it fair  to think you are also a clear thinker about investment value, objective, unemotional and rational about your own business, and can allocate capital like Buffett, Singleton or Malone? Doubtful.

6. Incentives. Dividends align shareholder and management incentives. Everyone gets paid. Buybacks can be a good or a bad thing here with regard to incentives. Many companies use buy backs as a fig leaf to cover up the fact they are also issuing shares to enrich management.


Dividends still matter
To those who charge around in markets trying to guess
the next quarter’s make-believe earnings number, the
concept of dividends seems wholly irrelevant. However,
to those with an attention span measured in longer than
milliseconds – who are few and far between, to judge
from today’s markets – dividends are a vital element
of return. Exhibit 2 illustrates this point graphically.
Looking at the U.S. market since 1871, on a 1-year time
horizon, nearly 80% of the return has been generated by
fl uctuations in valuation. However, as the time horizon
is extended, “fundamentals” play an increasing role in
return generation. For example, at a 5-year time horizon,
dividend yield and dividend growth account for almost
80% of the return. 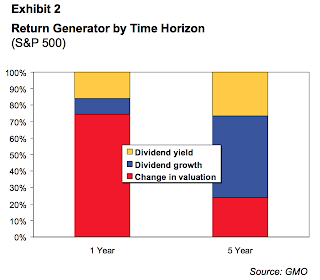 The chart above shows the opposite of Yglesias' assertion. Dividends only matter for long term (5 year), and share price movement matters on a short term (one year) basis.

8. Buybacks rely on management being focused on the stock market and share prices, but this approach is pretty limited. Benjamin Graham: "Basically, price fluctuations have only one significant meaning for the true investor. They provide him with an opportunity to buy wisely when prices fall sharply and to sell wisely when they advance a great deal. At other times he will do better if he forgets about the stock market and pays attention to his dividend returns and to the operating results of his companies."

Yglesias raises some good points in his piece and its always good to hear contrary points of view. Most of his points around buybacks are fine so long as your CEO is an all time great investor, but that's a shaky assumption. There are way more Chuck Princes than there are Tom Gayners. Buybacks are fine if your CEO is John Malone, for everyone else there's dividends.
Posted by gunnar at 2:58 PM