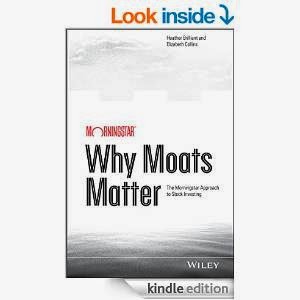 I read Why Moats Matter while on Martha's Vineyard. This felt especially appropriate. The moat concept that Morningstar pioneered is all about different kinds of structural competitive advantages. When you are on an island like Martha's Vineyard, there is no bridge to the mainland, only a ferry or a plane. If you need anything you better hope you brought it with you or prepare to pay a rich price to acquire it on the island. The only thing better than a moat is an ocean.

Heather Brilliant, Elizabeth Collins, and an all star cast of Morningstar analysts provide a detailed analysis of the Morningstar analysis framework. The book opens with the five kinds of moats that Morningstar uses - Intangible Assets, Cost Advantage, Switching Cost, Network Effect, and Efficient Scale. The rest of the book could just as easily be called How Moats Matter since it really focuses more on how to analyze moats and use them in your investing analysis.

The chapter on moats trends breaks down the competitive landscape by sector. That's interesting because looking at the positive and negative moat trends shows which spaces are more hotly contested 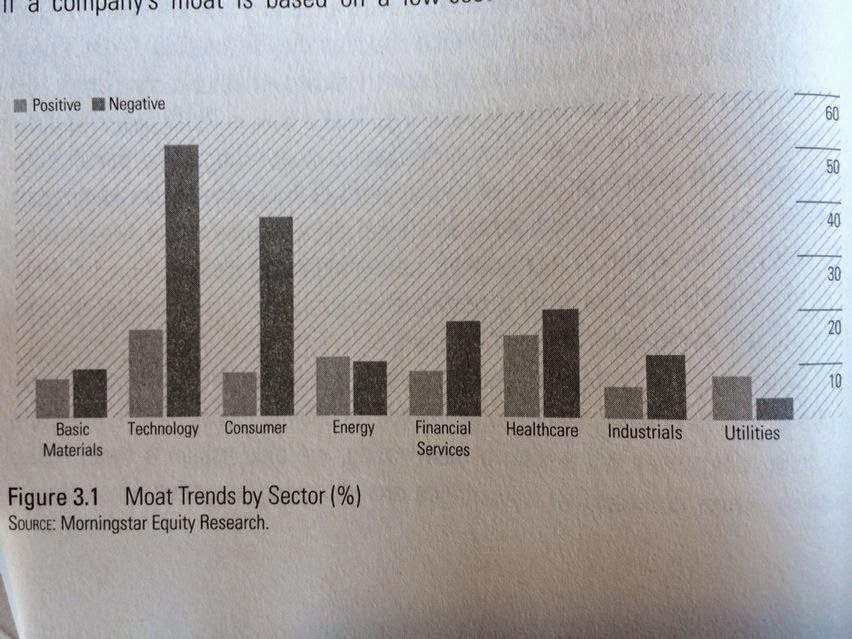 Todd Wenning's chapter is on How Stewardship affects economic moats. Morningstar's view is that its more about the horse than the jockey. Todd writes "Management itself can't make a moat, but a company can enhance or establish a moat resulting from its management's skillful effort to allocate capital toward moat-widening projects. On the other hand, poor stewards of shareholder capital that consistently invest in competitively disadvantaged projects for the sake of short-term growth and destroy long-term shareholder value in the process would likely see moats erode over time."

One of my favorite parts of the book is the many real world examples. The stewardship chapter lists detailed examples for each sector of exemplary standouts (like consistently shareholder friendly IBM) and poor standouts (like Dean Foods).

Josh Peters' chapter on using moats with dividend investing has several useful nuggets, several of which are gleaned from the real money portfolio that he runs. The first is on the importance of avoiding dividend cuts. In the real money dividend portfolio, that Josh Peters runs at Morningstar, they have experienced negative total returns in 81% of the companies where the dividend was cut. For companies that held the dividend flat, they earned a positive return 67% of the time, and for the dividend growers it was 89% positive. Simply avoiding dividend cutters makes a huge difference in total returns, So how can moat analysis help? The business' moat is an important safety measure.


Wide moat companies are more than half as likely to undergo a dividend cut. That's a factor that should be considered right alongside traditional dividend safety metrics like dividend coverage, payout ratios and so on.

Long run total returns and wide moats work well together, Josh Peters writes "An attractive and sustainable dividend policy can create a "clientele effect" in which shareholders, amply rewarded through dividends, are less likely to dump their shares and hurt the stock price on the basis of short-run fluctuations in profits. This in turn may give management a freer hand to concentrate on long-term initiatives, even at the expense of near-term profits or cash flow." The ability to think longer term than your competition is a very rare thing, this strikes me as a huge advantage when an investor can find wide moat, dividend paying companies.

The first half of the book is on the conceptual, analytical framework. Just as useful is the second half which shows how the analytical tools are put to use in each sector. Like Pat Dorsey's book, this sector by sector view is very helpful because it shows how to apply moat analysis in different segments. What you look for in energy is quite different than technology or industrials. Further, the authors describe their view as to what kind of moats you are likely to find in each of the major industry sectors.

The book works well on two levels - as a guide for how moat analysis helps investors, and how these apply in sectors. For me, the most fruitful insight is the intersection of wide moats and dividends, which can result in, as Josh Peters writes "a sound provider of income and total returns."
Posted by gunnar at 7:38 PM