Investing Lessons from the Best Trade in NBA History

The sports world is atwitter over Kevin Love joining Lebron James, Kyrie Irving and company in Cleveland. Is this is the greatest trade of all time or is it Red Auerbach getting Robert Parish and Kevin McHale in return for Joe Barry Carroll (aka Joe Barely Cares)?

Actually neither. The best trade by a wide margin involved a team and management that mostly no one  remembers, and no players.

Back in the 1970s, the NBA had a rival basketball league called the ABA. When the ABA folded, four teams, including current champ San Antonio, joined.  Two other teams cut financial deals, one of which proved remarkably successful:


"In the summer of 1976, with the ABA at the point of financial collapse after nine years, the six surviving franchises (the Virginia Squires went bankrupt immediately after the final season) began negotiating a merger with the NBA. But the senior circuit decided to accept only four teams from the rival league: the Nets (the last ABA champion), Denver Nuggets, Indiana Pacers and San Antonio Spurs.

The NBA placated John Y. Brown, owner of the Kentucky Colonels, by giving him a $3.3 million settlement in exchange for shutting his team down. (Brown later used much of that money to buy the Buffalo Braves of the NBA.) But the owners of the Spirits, the brothers Ozzie and Dan Silna, struck a prescient deal to acquire future television money from the teams that joined the NBA, a one-seventh share from each franchise, in perpetuity. With network TV deals becoming more and more lucrative, the deal has made the Silnas wealthy, earning them $186 million as of 2008, according to the Cleveland Plain Dealer, and $255 million as of 2012 according to the New York Times. (The NBA nearly succeeded in buying out the Silnas in 1982 by offering $5 million over eight years, but negotiations stalled when the siblings demanded $8 million over five.) On June 27, 2007, it was extended for another eight years, ensuring another $100 million-plus windfall for the Silnas. In 2014, the Silnas reached agreement with the NBA to end the perpetual payments and take a lump sum of $500 million instead. In the last few years of the deal, the Silnas were receiving $14.57 million a year, despite being owners of a team that hadn't played one minute of basketball in 35 years."

What a deal! The Silnas were clearly in the right place at the right time, no one knew what the future value of the NBA TV contracts would be. The Silnas played their hand well. They did not take a one time payment, instead they looked to the long run, recurring cash payments.

Most people cannot own a pro sports team, but income investors can learn a lot from this mindset. Instead of looking for stocks that will pop this year, why not look out a decade or so to find opportunities? Sure there are stocks with potential to grow more in the near term than Coca Cola or IBM or Glaxo Smith Kline, but over the long term these companies should deliver income and income growth far into the future. These are three companies with excellent dividend track records. 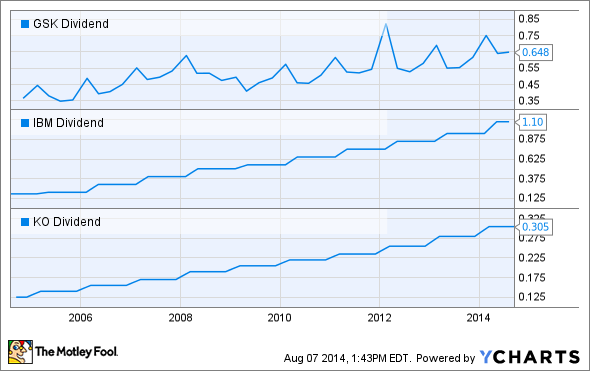 
Coke, IBM and Glaxo, all deliver above average dividend yields, all are in a defensible competitive position that can easily last a decade, and have long run dividend track records to demonstrate their moats.


These three defensive companies provide deliver decent to excellent current yields; and decent to excellent dividend growth. Its the kind of investment profile the Silnas would love. They turned down offers in the range of one time $3-5 million and were able to instead earn upwards of $750 million through focusing on long run income. In 1987, near the time the Silnas were turning down a $5 million buy out offer, Glaxo Smith Kline paid its shareholders $0.18 in dividends, today that payout stands at $2.40. Thinking in decades pays.
Posted by gunnar at 10:59 AM