The more real they are, the more fun blogs are to follow. So in that spirit, rather than talking about ideas in the abstract I maintain a hypothetical portfolio to track ideas where I'll semi-regularly (and hypothetically) invest and track buying (and where required selling) shares.

For tracking purposes I will use $1,000 to keep it nice and simple. The overall goal is long run income and dividend growth. Portfolio page with goals and tracking is here.

I first came across Tupperware as an investment idea some years ago, through the work of one of the finest investors I know - Jeff Fischer who runs Motley Fool's Pro service.

Tupperware has a lot to recommend it on the business side. The most famous characteristic is the parties themselves and how they illustrate the Liking principle that Robert Cialdini describes - "People are easily persuaded by other people that they like. Cialdini cites the marketing of Tupperware in what might now be called viral marketing. People were more likely to buy if they liked the person selling it to them."

There is a lot to like in how Tupperware is able to engage with its target market, from Cialdini's book Influence - "It’s gotten to the point now where I hate to be invited to Tupperware parties. I’ve got all the containers I need; and if I wanted any more, I could buy another brand cheaper in the store. But when a friend calls up, I feel like I have to go. And when I get there, I feel like I have to buy something. What can I do? It’s for my friends.”

Its hard to find anything resembling a good price, so why is Tupperware in a zone of reasonableness? One guess as to why Tupperware shares are priced well compared to the market overall is that investors conflate them with Herbalife which is undergoing lots of scrutiny as to its business model. However, Tupperware gets its income from the consumers at the parties.

Tupperware 10-Q: "The vast majority of the Company's products are, in turn, sold to end customers who are not members of its sales force."

Tupperware is a truly global business, its focused on the emerging market consumer. The U.S. is less than 10% of its business, and its sees India and Indonesia as its top markets going forward. Tupperware levels the playing field for women in emerging economies. The business model enables women all over the world to create profitable businesses.

The regional sales breakdown is as follows:
Tupperware sees itself as an AND company as in Developed Markets AND Emerging Markets. Still the latter plays the biggest role going forward - Argentina, China, Indonesia, Brazil, and Turkey grew over 20% last twelve months. 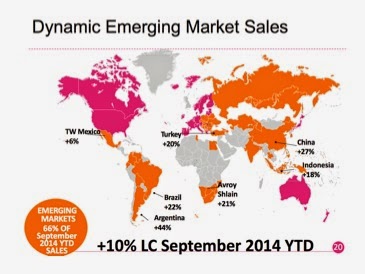 With so much to like about the business model, what about the goals of the Wide Moat Dividend portfolio - Safety, Dividends, and Growth?

The first red flag is the Debt/Equity level which sits at 2.4, that normally would be enough to stop the analysis. However, looking to Todd Wenning's single most important metric Free Cash Flow cover shows that Tupperware's Free Cash Flow provides ample coverage. 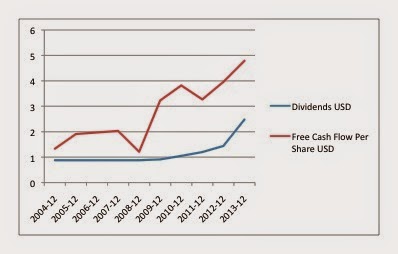 Tupperware has the Free Cash Flow to pay its dividend, and with an Interest Coverage ratio of 7.5 it also has the ability to handle its debt load.

Tupperware's current yield is 4.0%. It has a five year annualized dividend growth rate of 23%. Tupperware buys back its shares, and has reduced its overall share outstanding from 64m in 2010 to 51m outstanding today. 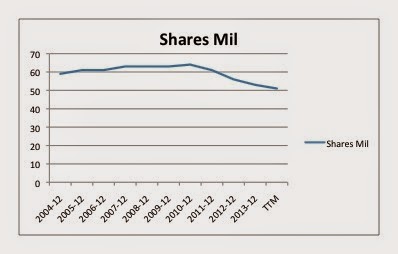 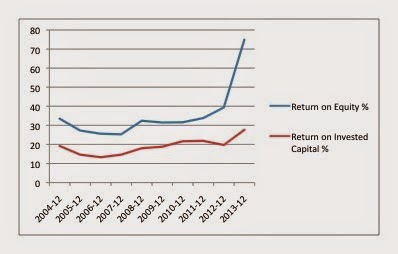 The overall combined effect shows a good opportunity for quality income. Tupperware's 4% yield is substantially better than average and above even what many Utilities pay today. But Utilities have pretty limited growth, whereas Tupperware more than doubled its revenue in the last decade.

Tupperware's current valuation also looks relatively attractive. Its P/E is 15.4 versus a five year average of 16.6. Its Price/Cash Flow is 12 versus five year average 13.4. Add it all up you get quality, income, and a fair price for an excellent business.

Last year, Tupperware "logged 24 million Tupperware parties worldwide in 2013, up incrementally from 22 million in 2012, 21 million in 2011, and 18 million in 2010." The company has a motivated, global sales force, treats its shareholders well, and room to grow.I plan to buy the shares, and keep them sealed up for a long time.
Posted by gunnar at 3:29 PM