To Sleep Well at Night Buy Businesses Not Sardines

The wild gyrations in markets brought to mind a mindless species - sardines. Specifically, the story that Seth Klarman shared:

“There is an old story about the market craze in sardine trading when the sardines disappeared from their traditional waters in Monterey, California. The commodity traders bid them up and the price of a can of sardines soared. One day a buyer decided to treat himself to an expensive meal and actually opened a can and started eating. He immediately became ill and told the seller the sardines were no good. The teller said, “You don’t understand. These are not eating sardines, they are trading sardines.” Like sardine traders, many financial-market participants are attracted to speculation, never bothering to taste the sardines they are trading.”

People freaking out about prices is not new. But these people have the wrong end of the stick. The whole point of investing is that you are a business owner. Being an owner means having the fortitude to hold through cycles to achieve long run excess returns.

The headlines are predictably apoplectic, but context is severely lacking. Let's say you own McCormick Spice, the world's number one spice maker with sales all across the globe. They pay a low 2% yield but they grow it each year and raised it by around 2.5x in the last decade. Its reasonable to assume there are decades of growth ahead of McCormick. After all, people love spices and the origin of the stock market all the way back to the Dutch East India company. That shows you the longevity of people's taste for spice.

Just like pretty much everything else, McCormick shares traded down over the last few trading sessions. McCormick now sells for $77/share. About a week ago the shares were around $84/share. Examples like that are what makes people panic. But should they?

$84 was an all time high for McCormick. So at today's price we are talking a 10% discount to an all time high. How many business owners would readily give up their company which has excellent, long run sustainable demand just because it was valued 10% lower than a week before?

Zooming out is usually a good idea in situations like this, here is a long run chart for McCormick 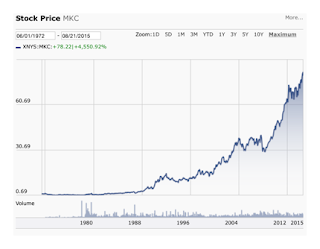 Gee that does not look too bad.

If you invested $1,000 in McCormick Spice in 1995, you would have $12,183 today. Its compounded at 13.2%. No genius insight required, just the idea that people like spice. Sure the market can get spicy at times too, but that is not a reason to run for the exits if you like the companies you own.
Posted by gunnar at 2:23 PM