In an oped in the FT two years back, Nick Train asks a great question - "what is the right price for quality shares?" That's a deceptively important and potentially difficult problem actually.

Its important because of Munger's three laws of investing 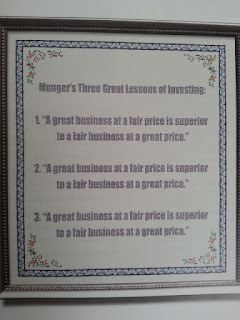 Its a potentially difficult problem because while most intermediate investors can recognize a bargain price and they can recognize high quality, the intersection of the two is problematic. Take a company like Diageo, its P/E is 20 right now. For a cheapskate like myself that is a bit on the high side. On the other hand, its a high quality franchise. For one example its Return On Equity has ranged between 32-48% for the last decade. But because the market is not generally stupid, it never gets classically cheap. The last time it was in bargain territory was 2008 (when everything was) when the P/E was down to 14.

So what to do? Sit on cash for a decade or two waiting for that one opportunity? Or pay up a bit for higher quality.

Any discussion of these issues has to begin with an acknowledgment of the fundamental investment attractions of these shares – which are self-evidently great. I would contend that more investment weight should be placed on the excellence of a business than its valuation.

It is easier to be certain that Diageo is a great business than it is to decide whether or not it is overpriced on 20 times earnings, or still cheap on 15 times. The excellence is not debatable; the valuation discussion is worryingly arbitrary. So, I tend not to worry about valuation unless truly egregious levels are struck – say a price/earnings ratio of 30 times or more. "

Morgan Housel did some digging on this topic, he went back to 1995 and looked at what P/E would you pay for an 8% return. Interestingly enough, many of the higher priced companies (on a P/E basis) had excellent returns, and many apparently cheap companies just stayed cheap or outright floundered. 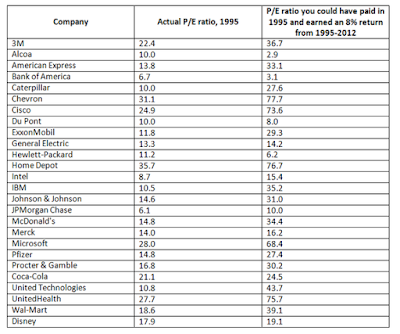 In the Adventure of the Copper Beeches, Sherlock Holmes said, "Crime is common. Logic is rare. Therefore, it is upon logic rather than upon the crime that you should dwell." There are plenty of cheap stocks, even today, however the number of great companies that can compound over decades is very small. That kind of quality is rare, but it is knowable with investigation. Therefore, in the case of price and quality, the investor should dwell on quality.
Posted by gunnar at 1:15 PM